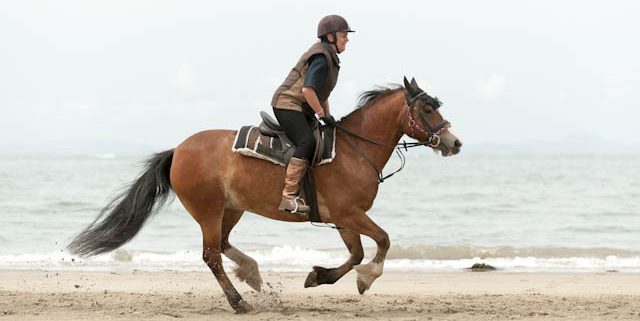 MELODY
The beautiful Melody is another of my lovely Welsh horses and her purchase was quite an adventure.
I had gone on a personal visit to stay on my friends’ farm in Wales, taking just two horses for a couple of days on a seaside break.
My friend Vernon asked if I was looking for another new horse as he had a couple of nice coloured cobs for sale. I went to have a look and decided to buy them both – but more of that when their turn arrives on our tour of the stables!
Vernon then said he had two promising mares up in the mountains and suggested taking a look at them as well – despite the fact that they were unbroken, unhandled and completely wild. 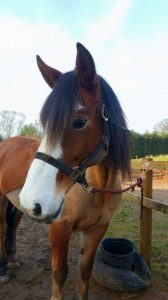 Off we went up the mountain, through gates and over desolate open moors. Every now and again Vernon would stop, get out of the Land Rover and give his trademark call. Nothing appeared and all we saw were sheep.
I had with me Charlotte and Jackie, the two girls who worked for me, and the three of us were really enjoying our intrepid adventure!
Eventually we reached the highest point of the mountain and had to get out and walk. Vernon called again and over the hill appeared two beautiful bay Welsh Section D mares. They were inquisitive but were wary and wouldn’t come near and I wandered around them, as close as I could get. They were sisters, May and Melody. 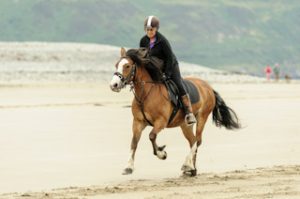 Their conformation and type was beautiful and I said I would have them both. Charlotte and Jackie looked at me as if I had gone crazy!
I returned a few days later and collected all four horses. Poor Melody, on arrival here she was hit with everything – vetting, injections, farrier, dentist, worming – and took the lot in her stride, as did the others.
I started training her straight away and within two weeks we were riding her. Because they had led a very natural life with Vernon, none of them had any worries about anything. Although they hadn’t been handled they hadn’t been mishandled either. I wasn’t having to undo other people’s mistakes and all four proved easy to train to ride.
Melody is such a sweet mare and is a lovely forward-going ride . She is kind and very genuine and has willingly done everything we have ever asked of her. 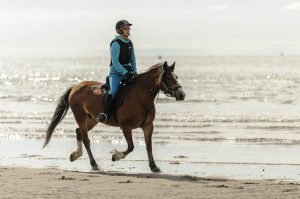 In the field she sticks with her Wales companions. She and Paddy are inseparable friends, although she does have a secret crush on herd leader Buttons. We often smile to see her following Buttons, with the devoted Paddy two steps behind. 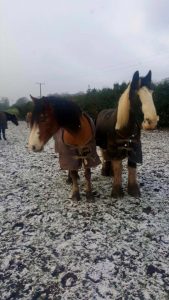