Toby’s official name is Tobias Jug – it brings a smile to my face every time I think of it.

And Toby makes me smile a lot too, because he is such a good and reliable boy here at the trekking centre.

We seem to have a theme going of horses I have found through friends and Toby is another one. 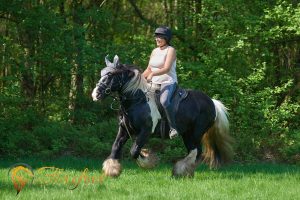 Toby out on Cannock Chase

I had already bought several horses – including Chase and Splash – from this particular friend, who has a very good eye for a nice horse.

She had moved to Loughborough when she contacted me to see if I would be interested in a great little straightforward 14.3hh coloured Cob. Lucy, a long term member of my staff whose judgement I totally trust, was at the time living in Nottingham, where she had a horse transport business.

Lucy went to see him on my behalf and liked him so much she didn’t even try him! She just popped him on her horse box and brought him to me.

As soon as he arrived we kitted him out with tack, jumped on him and took him out on the Chase. Toby is one of the few horses I have ever bought who really needed nothing at all from me, he just went straight into work.

And he has never looked back. I don’t think we have ever had a problem with him. 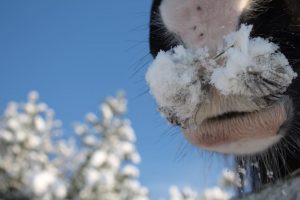 Toby showing off his winter Tash

He is a happy and relaxed pony whose forte is teaching lots of novices. Because of his size he can carry both children and light adults, so he is very versatile.

He makes us laugh every autumn. As his winter coat arrives he grows a fabulous moustache! I always say he grows it for Movember and he becomes Colonel Toby.

This year was lovely as Pam, a member of my staff, is one of his biggest fans and she took him on his first ever Sheriff of Lichfield’s Ride. 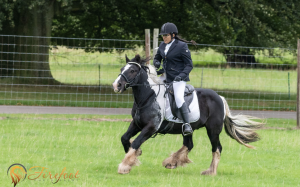 The two preparation days were really hard work for her as Toby has a very thick mane and tail and long and dense feathers on his legs. She had to scrub and scrub but it was well worth her efforts.

He looked immaculate and it was fabulous to see him so beautifully turned out and enjoying every minute of his big day out.

This gorgeous mare is my Apache war horse! That is what I think she looks like with her striking markings and I can just imagine her decorated with war paint.

But she doesn’t have a warlike nature at all. In fact, as anyone who rides her knows, she is the sweetest girl, with a kind and gentle personality. 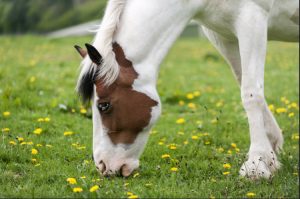 Like many of my horses, she came to me via word of mouth. The people who owned her had bought her as a foal, but when it came to breaking-in time when she was about four they found she was too lively and a little bit of a handful.

I was about to retire one of my original trekking horses, Duke, who needed a happy hacking home. As Tia was kept nearby her owner suggested that I took a look at her, and maybe we could arrange a horse swap. And that is what we did.

With Chase as company I rode Duke down to their yard, and rode Tia back home. My first impression was that she was very sharp – rather different to the laid back and calm lady she is today!

The next day I took her straight out for two hours on Cannock Chase and I never had a problem from then on. She just needed to be at finishing school for a little while and push past one or two things she found scary.

Since then she has done everything to the best of her ability, from the Wales holidays to the Sheriff’s Ride. 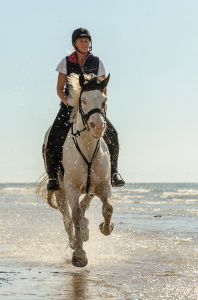 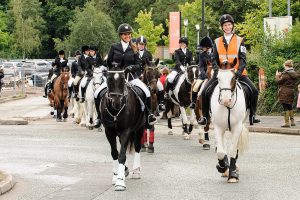 As soon as I bought my Dutch Warmblood stallion Zidane I realised that Tia would make a great mother as she is 16.1hh and a strong, well made mare.

So in 2013 I put her in foal and she produced a beautiful filly we called Arizona. Her daughter was a perfect mini-me, looking exactly like her mum. 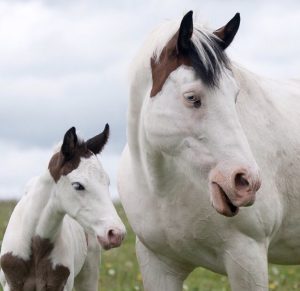 As readers of my foaling diary blog will remember, Tia was sneaky and caught me out. I had been watching her for days and she gave birth when I wasn’t looking. But I was quickly on scene and as she was a nervous first-time mummy, I helped the foal to stand and suckle for the first time.

Tia soon became a chilled out and relaxed mother. Nicoh gave birth three days later to Indiana and when the two mares went out together Tia was quite happy to let Nicoh watch both babies while she took a nap!

Because Arizona was such a big quality youngster I decided to put Tia in foal to Zidane again and in 2017 she gave birth to a fantastic colt foal. Colorado is even bigger than his sister. 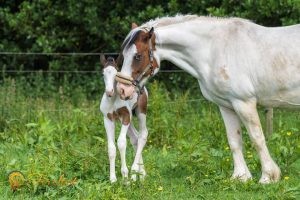 Arizona is now broken in and is becoming a fabulous trekking centre horse so we are all very excited about Colorado for the future.

Meanwhile, as her foals grow up, Tia is still loving her cantering out on the Chase and is becoming so good at teaching lots of new riders in the arena. She is a gorgeous girl and is much loved by everyone here. 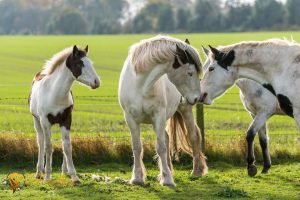 Summer is our little strawberry roan superstar and is the last of our S’s on our journey around the stable yard – but she is certainly not the least.

She is the grandma of our herd – the oldest of my horses – but Summer still has energy to spare and loves her work.

She was about six when I bought her from a rather exclusive riding school that was closing down. I was looking for a really nice pony and she was recommended to me by someone who said if she became available I absolutely must buy her.

I didn’t actually go and see her! But when she arrived I thought she was a little bit fat and put her straight on a diet and into work.

It was winter and at that time all my horses were stabled. One Monday morning I had a call from staff member Lucy to say I needed to get down to the yard as quickly as possible – and bring the video camera!

At first Lucy had thought Summer was suffering from colic. Then she realised the mare was in labour!

Soon we had a beautiful chestnut filly foal that I decided to call Autumn. I later rang the people I had bought Summer from and told them about our little bonus. They said Summer could not possibly have had a foal as they had no stallions.

Then they realised that they had turned out with Summer and another mare an 18-month-old British Arab colt. Surprise, surprise – he was chestnut with four white socks and a flaxen mane and tail, identical to our baby Autumn! And they called me later to say the other mare had also produced an unexpected foal.

As everybody knows, we still have both mother and daughter and they have always been fantastic members of my team. 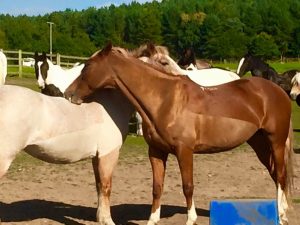 Summer has always taken life here at the trekking centre in her stride and has taught thousands of children to ride. Since we built the new indoor arena she has become a favourite with our instructors because of her kind and gentle nature and willingness in the lessons. 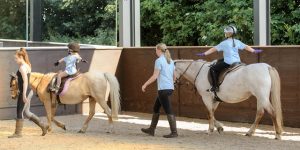 Summer, a favourite at Pony Club

She is fantastic at teaching children to canter. We have someone who has been waiting for ages to offer Summer a retirement home but so far she shows no signs at all of slowing down.

She is one of those genuinely safe and sensible ponies that are worth their weight in gold. It has been an absolute pleasure to own her for all these years.

This beautiful girl joined the trekking centre after her previous  owner popped in to ask if we would be interested in a pony they had that was in a field and doing no work.

I agreed to give her a try and the first thing we did on her arrival was bath her and clip her as she was so hairy. 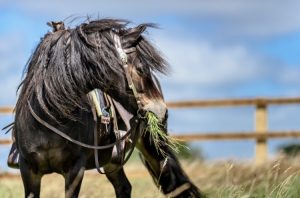 We started working Nutmeg very quickly and she settled immediately. She loves life in the herd and spends lots of time with her My Little Pony team friends.

She is quite lively and independent,  yet is very safe, so she is great for confident children who want to ride outside. 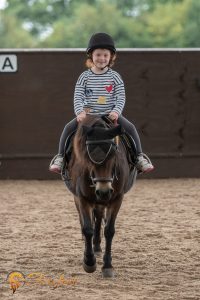 Nutmeg is a firm favourite and is loved by all the children who ride her. She is always having pictures drawn of her!

She makes us laugh because she does love her sleep and if she gets tired of waiting to work she always lies down for a nap! 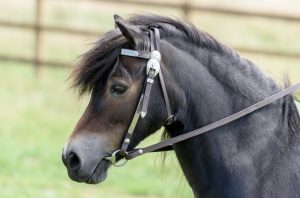 And we finish half term week with the last of our tiny team – the very lovable Mr Shrimp.

My nickname for him is Prawn! – He is a Welsh Section A with the lovely cream colouring known as Cremello.

He is yet another of my herd found for me by my former yard manager and now instructor Lucy. He belonged to a good friend of hers in Nottingham and she had owned him since he was a foal. 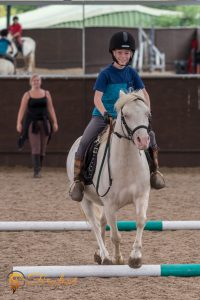 She had broken him in herself and had shown him very successfully at a high level. But she had to part with him and asked Lucy if we might be looking for another member of our pony team.

The new indoor arena was about to open so we were keen to find another good pony for children’s lessons. I completely trust Lucy’s judgement so I was happy to take Mr Shrimp. 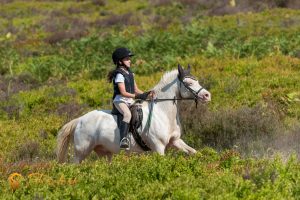 And I am very glad I did. He is absolutely adorable! He loves his little riders and always wants to be cuddled and snuggled.

Just like Nutmeg he loves to take a nap, but he lies totally flat and motionless and sometimes he scares us. I think playing dead is his little joke! 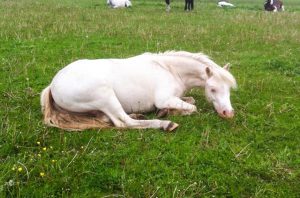