Welcome to my new regular blog feature. Every week there is a horse that shines through for me and my staff, and we will be sharing their stories with you.

It might be a horse that is going brilliantly in the school, or one that has given a beginner rider their first canter out on the Chase. We will choose one every week for you.

And because I am the boss, I get first pick! My choice is our gorgeous new boy Oberon Foppe, a pure bred Friesian whose origins are in Holland and who has only been in this country for a year. After hearing a little of his history his is a real Black Beauty story that I want to share with you.

His name was simply Foppe, but as you all know, I like a great sounding name and so I double barrelled it by adding Oberon. 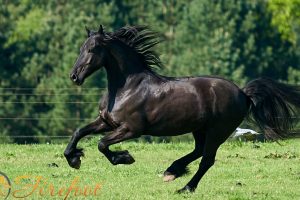 I have always firmly believed that there are some horses that are destined to be mine and I think he is one of them. He has found the place where he needs to be.

For a little while, I have been on the lookout for a new member of my team. I had seen a few, but had not really felt the connection with them that I really need to experience before I buy and had come home disappointed.

However, I had noticed that a friend of ours who sells quality sports horses on behalf of their owners had on her yard a beautiful Friesian gelding.

I had been looking for a big weight carrier type. Now I was considering something completely different!

Something just drew me to him, and it was quite an impulsive buy. I was negotiating before I actually saw him, but my friend assured me his paces and jumping were fabulous and I trust her judgement.

Even more beautiful than his photos

I went over to her yard with my horse box and as soon as I saw Oberon in his stable I was shocked. He was even more beautiful than his photos! He turned and looked straight at me and he reminded me instantly of my stallion Zidane, the horse with whom I have the closest relationship. 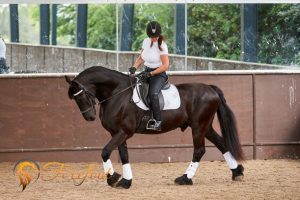 Oberon came straight home with me and I felt him totally relax as soon as he arrived. Within ten minutes, I was riding him in the arena. I was blown away by his sensational paces! At some stage in his past, he has received a really good education.

Although I had been told he had done very little hacking, I took him out on Cannock Chase the next day at the height of Storm Hannah. He led a ride of 20 through the gales and rain, and loved every minute of it! He was so excited but his behaviour was perfect.

Within a couple of days, the lady who had owned Oberon contacted me and I asked her for more information about him. She came to visit and was delighted to see him looking relaxed and happy.

The new buyers then acquired him as a driving horse, but when he was put in harness he went crazy and turned the carriage over, injuring himself and the driver.

So, he has had a couple of bad experiences and when she brought him home she found him to be very nervous. He didn’t settle well and she struggled to handle him on the ground, with him breaking free a few times. Eventually, she made the sad decision that she needed to find the right home for him.

He came here, and from my point of view I see a horse that is totally relaxed in his new environment. He has never tried to pull or barge, he loves to hack out and his work in the school is fabulous. I think he has found his happy place.

He has fantastic breeding and my next aim is to track down his past. How did he end up on that yard in London? He has many behavioural traits like my stallion Zidane, and I am convinced that he was an entire for quite some time.

Oberon is loving his new life and I really enjoyed turning him out with the herd. He was so excited to run free in our fields and he really showed off his spectacular moves! Our photographer Tim was able to capture some fabulous shots. 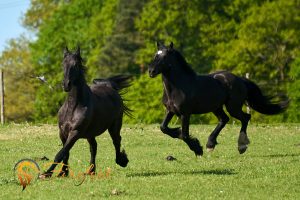 Unfortunately, whilst enjoying himself out in the fields with the rest of the herd, he managed to injure one of his hocks, so he has been off work recuperating for a while, following treatment by the team at Pool House Equine Clinic. As of next week, we will be bringing him back into work gently, so you should see him out on the treks again very soon. 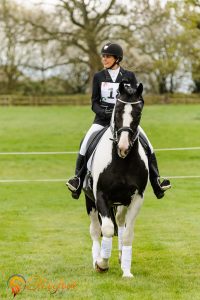 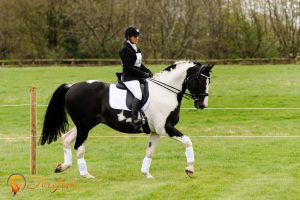 Welcome to horse of the month – our new regular feature here on the centre’s website.

Every month we’re going to feature one of the horses you all love so much – and who better to start with than our beautiful Larosa.

All the centre’s regulars will know that the excitement is growing because Larosa is expecting a new addition to our herd.

Larosa, a gorgeous bay Welsh Section D, is in foal to Zidane, our coloured Dutch Warmblood stallion. Everyone is talking about what the new arrival might be. The due date is May 20 – but breeding horses is always a case of wait and see.

We have had Larosa – Lola for short – for three years. She arrived as an unbroken five-year-old and proved a quick learner, always bold and confident. It wasn’t too long before our clients were enjoying riding her on the Chase.

That was one of the reasons we decided to breed from her, even though she is quite young. She is very popular here at the centre. We haven’t got enough Lolas to go around, so we decided we needed a baby one coming along behind.

Another reason for putting her in foal is that she is the ‘Nanny McPhee’ of our herd. She loves the youngsters and becomes surrogate mum to all our weanlings.

Our stud vet has loved her from the moment she first met her, and recommended it was time she had a baby of her very own.

We are counting down the days now. It is the first time we have covered a bay with Zidane and we are so excited to see what colour the little one will be.

Zidane’s offspring here at the centre start with Dakota, who was born coloured, a flashy black and white just like his dad. Now he is a spotted Appaloosa – the same as Nicoh, his mum.

Then there is Whispa’s son Oregon, who is dun with black points and a dorsal stripe. Last year’s foals are Indiana – Nicoh’s second baby – who was born a chocolate bay but is now steel grey, and Arizona, who was born a skewbald like mum Tia and has retained her original markings.

All their colourings seem to take after their mothers, and I have seen pictures of some of Zidane’s earlier babies, born before he came to us. One was coloured and another was bay.

In my mind Larosa is having a boy and he is bay. But one of the exciting things about breeding is that you simply don’t know, so we will be having a sweepstake for a bit of fun. Keep a lookout when you come to the centre and have a go. There’ll be a prize for the winner.

Larosa is thriving in pregnancy. She looks great after wintering out, but she’s now coming in at night to the comfort of her foaling box. For a maiden mare she has a really big baby bump so we’re keeping a close watch on her.

The cameras in the box are linked to a monitor in my house and I am studying her night time routine carefully so that as the due date gets closer I will spot any tiny changes in her behaviour. From now on we will also be looking for signs of the formation of her udder. I will take pictures so we can identify the changes.

When the birth is imminent I will go into the stable with her to make sure everything goes smoothly and she has no difficulties. Once the foal is standing and drinking I will leave the pair of them alone to enjoy some quiet bonding time together.

I have no doubt at all that Larosa will be a wonderful mum. She has wanted a baby of her own for so long that it is just great her time is nearly here.

We know how interested all Larosa’s friends are so we are looking into the technology of showing the foaling box feed on our website. We would love you all to share in this beautiful experience so keep an eye on our Facebook page for news.