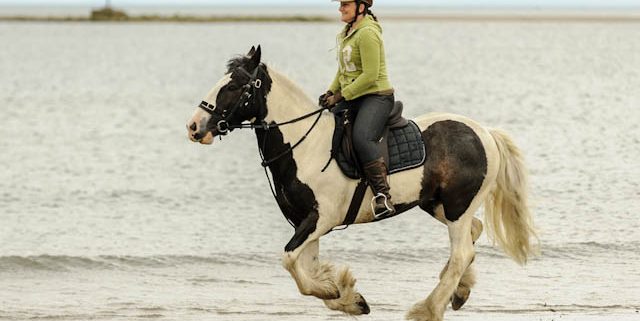 PADDY – Coloured Irish Cob – Gelding
Paddy was one of the four I brought home from my Wales adventure – probably my best ever shopping trip!
You will remember from last week’s blog about Melody that I originally agreed to buy two coloured cobs.
Paddy was one of them and he was special from the start. He had been gelded late, so he was a nice big horse who still looked like a stallion. He had a lot of presence but in a calm way, so he had a strong and dependable demeanour.
Like Mel, when he arrived he had to go through the whole routine of vet, farrier and dentist and he was unfazed by the whole procedure. He went straight into training and within two weeks he was riding out on the Chase with me on his first trek.
We did have a little hiccup with him a while later when he started to catch a few people off their guard. Because he is a big hairy cob people are inclined to think he is bound to be a dopey plodder and some were underestimating him.
He isn’t a plodder – he is actually a forward going and active ride and for a while I only put my stronger riders on him. We soon worked him through it and those experienced clients have helped to make him the lovely cob he is today.
Now he is a delight to ride and so dependable, he is a real confidence giver. We find that when we are teaching people to canter for the first time he will give them a really fantastic first experience.
Paddy has such a good reputation these days that we call him “Super Cob”. At first glance people see him as a traditional coloured cob – some clients even ask if he is a Shire – but there is more to him than meets the eye. If we were to clip off all his hair, underneath you would see a quality horse, much finer than he looks! 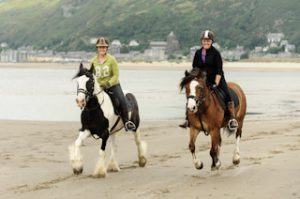 He doesn’t need a lot of leg or encouragement. He is a really comfortable ride and he has that boost of extra power that makes cantering on him really exhilarating. But he is kind and gentle too, which makes him the perfect package for all levels of riders.
Just one problem – he is quite laid back in the indoor arena! I ended up riding him myself during one of my bareback lessons  and although I got him going nicely in the end, it was a bit of a challenge! But it gives us something to work on and we will get there. 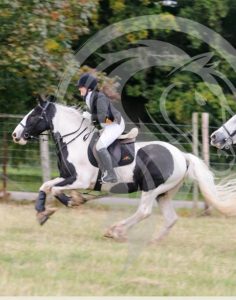 Paddy’s most endearing quality is the spectacular moustache he grows with his winter coat. His “Movember Moustache” has to be seen to be believed. 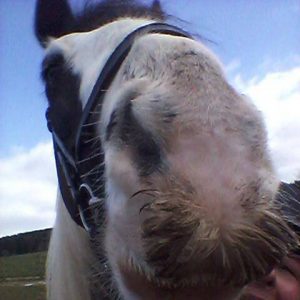 One of our lovely regular riders, Marie, is a great Paddy fan and this winter she bought him the most gorgeous leopard print turn-out rug. Twinned with his big moustache he has now been nicknamed “Medallion Man”!
https://www.cannockchasehorsetrekking.com/wp-content/uploads/2017/04/paddy2.jpg 425 640 CCTC https://www.cannockchasehorsetrekking.com/wp-content/uploads/2017/11/cropped-icon.png CCTC2017-04-05 15:03:482018-01-12 15:40:06Paddy - Coloured Irish Cob - Gelding
0 replies