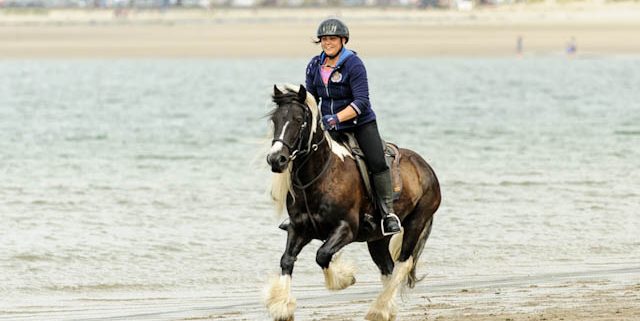 LIGHTNING
It’s often said that some people and animals are just meant to be together. That is something I firmly believe in because it has happened to me too many times to be just coincidence.
Look at Lightning, my beautiful coloured cob. Fate certainly had a hand in his arrival at the trekking centre. I will tell you the story.
I was looking for a happy hacking retirement home for one of my horses, PJ, and advertised him on my Facebook page.
I had quite a lot of response, but one reply came from a lady who asked if I would consider a swop. She had a newly broken young horse but was finding him a little bit too much for her and wanted a nice sensible all-rounder for herself and her children.
In a strange turn of fate it turned out that the horse she was offering me had been sired by our very own Pirate, bred in Wales by my dear friend Vernon and I had known him since he was a foal! 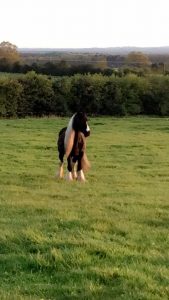 I had seen him many times on our regular visits to Wales for our riding holidays, when we were based on Vernon’s farm. Vernon had quite a few youngsters by Pirate, but Lightning had always been one of my favourites because of the large amount of black on him.
Vernon had asked if I wanted him but at the time I hadn’t got room for another horse. Next time I went the youngsters had been sold and I felt a pang of disappointment. Little did I know then that Lightning would travel across the country and find me again!
When I realised that the horse I was being offered was my little black cob from Wales I didn’t hesitate. I didn’t even go to see him. The lady came to try PJ, loved him, and the deal was done.
The way I would describe Lightning is a real-life My Little Pony in big size. With a long flowing mane that sweeps his shoulders and a gorgeous full tail, he just needs a butterfly or rainbow on his booty!
He was a little bit green when he arrived, so I went back to long reining and loose schooling before we ventured out on the Chase and he took everything in his stride.He was willing and keen and has gone from strength to strength.
Lightning excels at everything he does, from the bareback lessons to the riding holidays. I was so proud of him on the Sheriff’s Ride when he won the best turned out prize with our Mel. He looked stunning with his beautiful mane and feathers plaited. 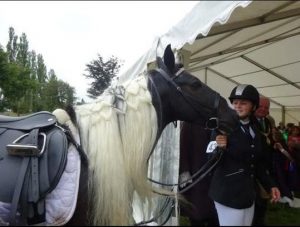 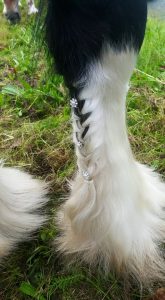 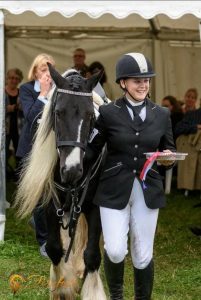 He made friends in the herd very quickly. It was interesting that he had never before met his father Pirate but they became best friends immediately and are now inseperable. I love to watch them interacting.
People sometimes say that stallions don’t know their babies, but I believe that’s wrong. Capulate and Atlantis, Lightning and Pirate, Zidane and his little herd of youngsters – they all have a special relationship and definitely know their babies!

One of my most emotional moments was when we took Lightning on his first riding holiday to Wales. He was returning for the first time to the farm where he was born.
When we turned our horses out to graze he led our gang of 15 at a canter to the fence bordering the next-door field. Waiting to greet him there was his mum – they hadn’t met since he was sold but they clearly remembered each other and were reunited for a week.
It did cross my mind that he wouldn’t get on the horse box to come home! But there were no problems and we decided Lightning preferred to live with his dad.
https://www.cannockchasehorsetrekking.com/wp-content/uploads/2017/03/lightning4.jpg 425 640 CCTC https://www.cannockchasehorsetrekking.com/wp-content/uploads/2017/11/cropped-icon.png CCTC2017-03-21 17:01:092017-08-02 00:04:20Lightning
0 replies