LAROSA
The lovely Larosa – stable name Lola – is a bay Welsh Section D mare whose registered name is actually Budore Lea-Rose.
I always call her Larosa, even though nearly everyone else calls her Lola. 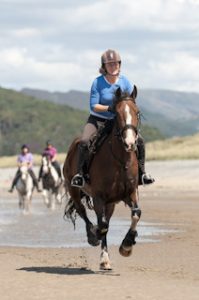 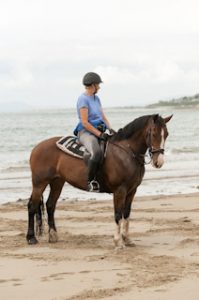 She is another find by Lucy, my former yard manager. Lucy wasn’t working with me at the time but I still asked her if she would keep her eyes open for a nice new horse for the trekking centre. I wanted something forward going for our experienced riders.
Lucy spotted Larosa on a yard in Tamworth. She had been bred in Ireland by a lady who did a lot of showjumping but also produced horses to sell. The mare had been lightly backed and had done a little bit of ground work, but I wanted to put my own stamp on her as for me she wasn’t ready to be mounted.
She reminded me a lot of one of the best mares I have ever had, one of my original trekking horses called Melody, so decided to buy her and  went back a couple of days later to bring her home.
The jumpiness I had noticed when I first went to see her soon quietened down when I began working with her and she soon relaxed on our yard. 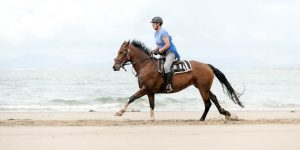 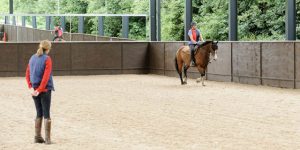 I started riding her out quite quickly and she took to it straight away. She is very genuine and straightforward lady, who absolutely loves being out on the Chase.
My stud vet had a look at her and said she would produce a fantastic foal.  Once out in the field she turned into our Nanny McPhee. When all of our foals have  been weaned Larosa has become their surrogate mother. I soon realised I would have to breed from her because she absolutely loves babies!  I decided she deserved to have one of her own with our handsome stallion Zidane. She gave birth to the most beautiful coloured foal that we called Montana and, as I had expected, she turned out to be a fantastic mother. 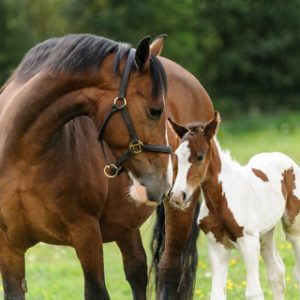 The only downside was that when we brought her back into work she was super excited to be out on the Chase again, so I started to ride her myself, she was very lively and it took her a while to settle back down.
Her daughter Montana is such a high quality filly that I am thinking that Larosa may be the next one that we put back in foal. We really should seize the chance to breed another classy foal from her and have beautiful ‘mini Larosa’s’ for future Trekking Centre horses.
Larosa is a lovely mare to own, she is perfect in every way.
https://www.cannockchasehorsetrekking.com/wp-content/uploads/2017/03/lola.jpg 319 640 CCTC https://www.cannockchasehorsetrekking.com/wp-content/uploads/2017/11/cropped-icon.png CCTC2017-03-08 14:53:472017-08-02 15:17:48Larosa
0 replies