Red – Appaloosa – Gelding
Red – full name Afon Fed – is one of our most popular horses here at the centre, he has come so far from the horse that he was when he first arrived here.
This handsome and traditional spotted Appaloosa gelding found me through one of our lovely regular young riders.  As well as riding here she also rode at a riding school where her favourite was a spotted horse.  The family  decided to buy one of their own and went to the stud where this horse had come from, an bought Red. He was ungelded and had only just been backed. 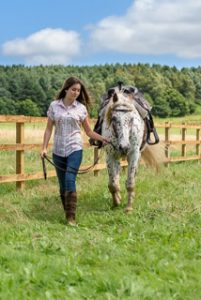 In my opinion this is a bit like buying a Ferrari as your first car, especially as Appaloosas can often be a little bit quirky and need a lot of work. I would not choose such a green horse for a first-time owner.  She moved him to a new yard and had a lot of instructors trying to help her with him but he still became, in my view, a little bit dangerous. When I was asked to give my opinion and met him for the first time I found him to be one of the scariest and most unpredictable horses I have ever sat on.
I don’t scare easily and I don’t get off a horse easily, but this boy was worrying about everything his rider might do, so he just couldn’t settle or feel safe. She was trying to ride him through his problems, but I would not ride a horse who was feeling so tense. I did some ground work with him and I could feel his tension as soon as I mounted. 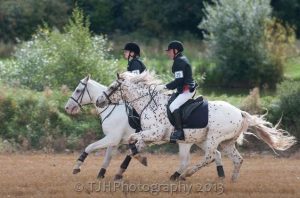 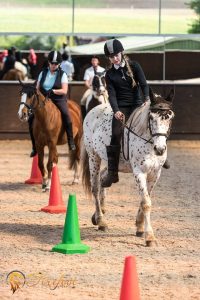 I offered to help with Red but eventually his family decided to offer him to me. It was a tough decision for them to make because they are lovely people who loved him very much. As it happened I had a nice Welsh Section D called QT who needed a quieter life, so we decided to swop horses.
His yard wasn’t very far from me so I rode QT over there to fetch Red with another horse as company. I have to admit that on the way back I was thinking ‘what have I done?’ because I had to leap off him at least twice.
It took a couple of weeks of really intensive training and me riding him out to start to get through to him and get him through whatever it was that was bothering him. Eventually I started to make progress. 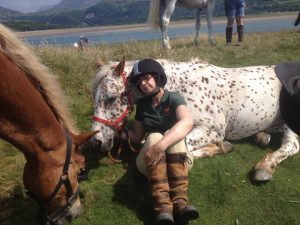 Writing this story now makes me think that all of you who know Red and love riding him so much will never believe it!
People say to me now that you can trust him with your life – and that is absolutely true. Years later no-one can begin to imagine the sort of horse that he was.
The trekking centre was his saving grace. The feeling of security he gained from living in our herd environment enabled him to be ridden in a quiet and calm atmosphere. He felt safe and at ease.
I bought Skye from the same yard and they had been stabled next door to each other. Skye was already here when Red arrived and straight away they became best friends in the field. They will even share a stable beautifully. Relaxing in Skye’s company really helped Red to chill out and for such a nervy horse he never had problems in the field.
I think in another environment he would never have become the horse he is now. He does everything and has always done everything that is asked of him. He is so relaxed and happy in the indoor arena that he excels in our lessons.
He is so different to the horse I bought – our handsome boy and a reformed character. 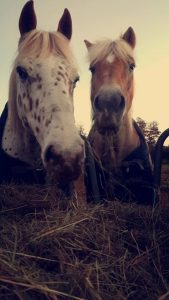 The Power of the Herd
This site uses cookies: Find out more.
Scroll to top