This lovely mare – full name Chase Wispa – has a story so full of plot lines that it could be an episode from our very own trekking centre soap opera!

We have here her mum, Princess, and readers of my blog will know that Wispa was a surprise package. But that is just the first chapter in the Wispa story.

Princess was a three year old when I bought her and we had no idea that she was pregnant. When we got her home I asked the vet to check her over – and her foal was born two weeks later.

She showed no signs at all of being in labour. I was keeping a close eye on her and checking constantly, but when I popped my head around the door on one of my visits there was a stunning golden coloured foal running around.

Wispa, the foal named after a chocolate bar

I named her after the chocolate bar – I already had a Galaxy! – and from the moment she was born Wispa was very bold. She would mow you down if she wanted to and she learned quickly to be an escape artist. She had no fear of electric fences.

When she was old enough I started to lightly break her in, but then at one of our weekly health checks my yard manager Lucy mentioned to me that she thought Wispa was putting on weight.

On close inspection I nearly fell on the floor – Wispa was in foal!

And I knew straight away what had happened. About nine months earlier the whole herd had one night broken into my stallion Zidane’s field. I had checked all the mares and didn’t think he had covered any of them – clearly I was wrong!

Obviously a 16.2hh warmblood is not the ideal partner for a pony mare so I immediately called my stud vet Emily. She popped in a camera – and we clearly saw an eye blinking back at us. Neither of us had seen that before!

Wispa gave birth to a fabulous golden dun colt foal that I named Oregon. The accidental baby was wonderful, with beautiful markings. 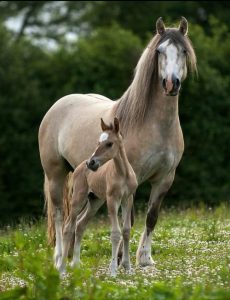 She was a good little mum and I love having the three generations, grandma, mum and son living together in our herd.

As soon as Oregon was weaned I began work again with Wispa and she really grew up to become a great little all-rounder.

Wispa has become very popular and she has her own little fan club of riders who ask for her, especially as she so loves her cantering out on the Chase. 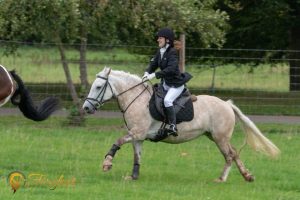