It’s time to choose another Horse of the Week and, as it’s my turn, I am opting for our beautiful Tyri.

I know this strikingly marked big boy is a great favourite with many of you, so he deserves to be in the spotlight.

I bought Tyri in August 2018. My yard manager, Sonia, had spotted an advertisement and, knowing I was in the market for a new horse, alerted me. My aim was to find another big horse, a Brodie type, and so I rang up about him and then went to have a look.

He was from the Isle Of Man originally, but had been brought over here to be sold from a riding school, which, unfortunately, was then closing down.

Tyri was 16.2hh, eight years old and had been schooled in dressage up to elementary level, but my first impression of him was that he was very quiet. He stood quietly to be tacked up but wasn’t fussy or particularly interested in people.

I rode him in the arena and he was quiet in there and was very laid-back when I took him for a hack. I liked him, but thought he might be a little too quiet for the trekking centre. People always assume I look for quiet horses, but I actually like something forward going and enthusiastic, and they then become more laid-back when they are working here.

Although I liked Tyri riding-wise, I wasn’t 100 per cent sure, so I decided to take a gamble. I made an offer to his owners and then walked away.

A few weeks later I had a call from his owners. They hadn’t found the sort of home they wanted for Tyri, so they had done their research on me and the trekking centre, and decided to accept my offer.

They brought him over for me and were over the moon when they got here and saw the sort of home he was going to have and the life he would lead. 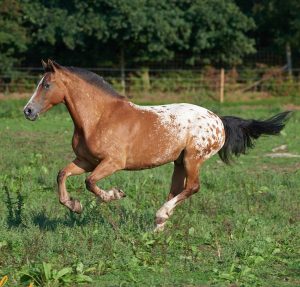 And as for Tyri, well, he was over the moon too! The horse that came off the box was nothing like the one I had gone to see. His head was up, his eyes were out on stalks when he saw all the other horses and he clearly thought he had died and gone to heaven!

Quite quickly, I decided to fit him with new tack and I couldn’t believe the difference. He was a real attention seeker, wanting to snuggle with me and generally behaving like a big dog. In fact, my instructor Lucy Powell says he is the equine equivalent of a Labrador puppy!

I got straight on and took him out to show him Cannock Chase for the first time. I didn’t know what to expect because the horse I had gone to try hadn’t excited me when I hacked him out.
This version was quite different! Tyri was switched on, excited and happy to lead the way. He loved being with the other horses and was full of enthusiasm. Being out on the Chase was already working its magic!

When we turned him out with the herd we found he was the most playful boy ever! He costs me a fortune in ripped rugs, but I wouldn’t have the heart to take him away from his friends. He just loves to play!

In the stable Tyri is noisy and greedy. He soon lets us know when he has eaten all his hay! 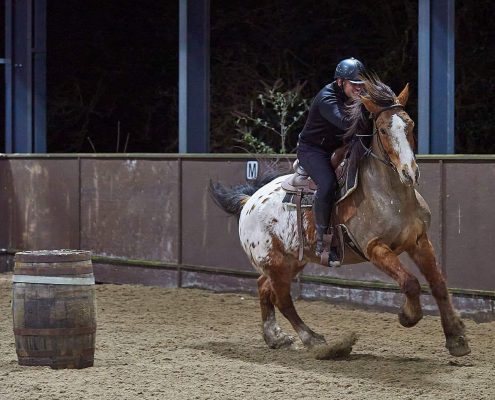 After his arrival our priority was to hack him out as much as possible, because much of his previous life had been spent schooling and we wanted him to benefit from a change. However, as time has gone on he has become so versatile.

He now works beautifully in the school and he just loves our saddleless riding sessions, our Western lessons, polework clinics and – his special favourite – barrel racing! For a big horse, he is really agile and he gets very competitive! In his previous life he had done showjumping, but in the summer we introduced him to cross country and he loved that too.

Tyri is my Horse of the Week because he has become such a fabulous all-rounder. He has taken to everything we have thrown at him with real enthusiasm.

We are so excited to see how far he has come – and how far he will go. He loves his life here. He is one happy boy!