Everyone knows that I train all the young horses here at the trekking centre myself, and people often ask me how long the training process takes.

My honest answer has to be “I haven’t got a clue!”

Because when I start working with an unbroken youngster I genuinely don’t know how long it will be before I can ride that horse out on Cannock Chase for the first time.

Some take months, others weeks and I have been lucky enough to have had a few that were so good I hopped on after a couple of hours and rode them away.

Training Nymeria is a case in point. In some ways I feel that she has taken quite a long time, but suddenly she has made such quick progress that she has had her first little outing on the Chase and I am delighted to report all went according to plan.

In case you have missed the story so far, Nymeria is a beautiful five-year-old PRE Andalusian, the full sister of my fabulous lead horse Pele. I bought her last summer to train as a trekking centre horse and she arrived here from the stud where she was born and the herd she had lived with all her life.

I said at the time that she was like a country girl transplanted to the big city. Everything was a shock to her senses. I needed the help of my trusted equine friend Chase to get her to load on the horse box and he ended up bodily pushing her into her stable. 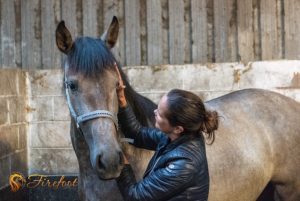 She had never been stabled before and despite Chase’s calming presence next door she quickly became stressed. But that relationship with Chase proved invaluable later, as you will see.

So I turned Nymeria out into the field with her brother and the rest of the herd and that calming environment and the routine of life with our boys and girls meant I was soon able to begin the training process. 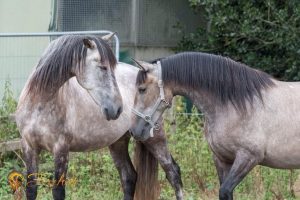 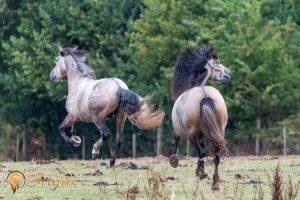 Pele & Nymeria enjoying her arrival at the trekking centre

I found immediately that she was quite sensitive and routine has been crucial. When I am getting her ready for a training session I always do things in the same order and that has reassured her and also disciplined her. The first thing I do in her stable is put on her training halter and everything else follows on.

The biggest issue has been putting her bridle on and I have no idea why it has been a problem. At first she was fine, but then she started backing into a corner and I knew that if I pushed her it would become a problem.

I had to think out of the box and I came up with the idea of doing it off Chase’s back while in the arena. I would be leaning down to her instead of reaching up and she would have the reassuring presence of a steady horse she knew and trusted to give her confidence. 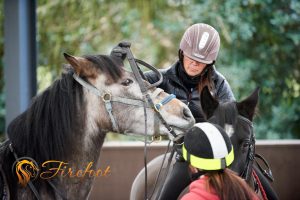 It had to be worth a try – and I was right! Now I can stand on a small mounting block in the stable to put her bridle on – but she still likes to have lots of kisses and cuddles while we do it. Tacking up is done slowly and I always lower the saddle on to her back with my hand underneath so it never bangs on her.

Chase has given Nymeria such reassurance that when I started long reining her I did it from his back. I had never seen this done before but I had an instinct it would help her as she was very flighty and wanted to run away from the long reins. 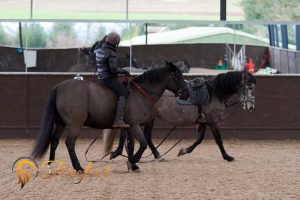 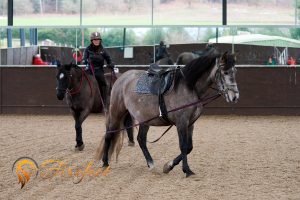 In fact, it proved to be such a successful and stress free way of doing it I think I will use Chase again to help me when I start training Montana.

Nymeria’s skittishness stopped as soon as I started training her from Chase and now she focuses in the school and is not easily distracted. She is very relaxed.

My yard manager Sonia Aston or another member of my staff is always with me in the arena and together we give her lots of praise and reassurance throughout the training sessions.

Our long reining work has meant Nymeria’s steering was eventually in place and her join up with me is perfect. Once those were there I knew it was time to start laying over her and getting her used to feeling my weight. 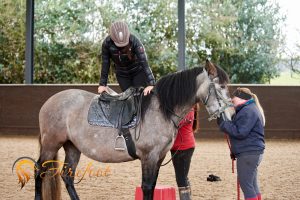 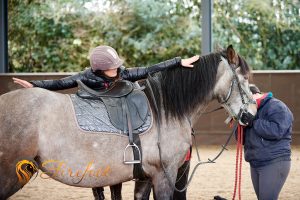 The process of mounting her has been much easier than with her brother. She is a quick learner and very smart. Once I was on her I found her to be settled and relaxed and I stroke her and talk to her all the time. I always have my music playing and I think that keeps both of us relaxed.

Once I had sat on her several times, with Sonia leading her for just a few steps, I could feel that she was ready to step up to a higher level and the next training session was a breakthrough day.

We were able to walk circles around the school, with Sonia leading Nymeria, and it was not long before she was able to step further and further away. Nymeria remained calm and focused without her trusted friend alongside her and soon I was able to ride her independently for the first time.

I could use my legs – also for the first time – to gently urge her forward and then I picked up a gentle contact on the reins. The priority is always to prevent an explosion, but that never felt in the least bit possible.

I was so proud of her and so pleased with her progress. This was only the fourth time I had ridden her and what is really rewarding is seeing her now compared to the skittish young filly she used to be.

Long term it is better to take as much time as you need when training a young horse. You should never rush and I will always take as long as is necessary. I want Nymeria to be a lovely horse for my clients to ride. 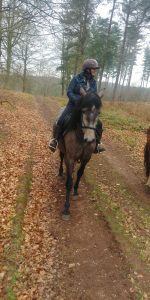 DOWN MEMORY LANE by John Brooks