This is the second episode of my new regular blog feature – horse of the week.

As I explained in my earlier blog, I want to highlight one of my horses regularly who has shone through in their work in some way.

I and my staff will nominate our choices and, as I had first pick with our lovely Friesian gelding Oberon Foppe, this time I have asked my yard manager Sonia Aston to name her hero or heroine.

It’s not exactly a surprise that she has chosen Saffy, who is often Sonia’s lead horse. We all know how much Sonia loves this honest and genuine mare, and the two of them have a wonderful, close relationship.

Sonia can always depend on this lovely Clydesdale x cob, but she says that, during the spring and summer, Saffy was called on for extra duties and really came up trumps. 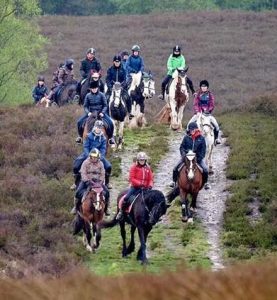 This has been an exciting time at the trekking centre as we have introduced five new horses to the delights of hacking out on Cannock Chase. I have trained our beautiful young Andalusian mare Nymeria and our homebred filly Indiana, who is the daughter of my Dutch Warmblood stallion Zidane. Plus I have bought Oberon, who has done very little hacking out during his life so far, and Sonia has bought her own young horse Elka, a four-year-old Friesian x Dales. And now another of Zidane’s daughters, the four-year-old Montana, is ready to join them.

All of them have had to be introduced to the big wide world that is the Chase and Saffy has often been called on to act as baby sitter.

It is not just Sonia who has been impressed by Saffy’s calm, brave and bold attitude. Each time I have been riding the newbie, I have been so glad of Saffy’s solid and reassuring presence alongside me. If the new horse has spotted something that worries them, they have cuddled up to her for safety and reassurance, and she has allowed them to do that without a problem. 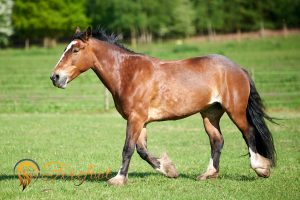 She spends all her time in the field grazing alongside her beloved Alfie and her best friend Nutmeg. She has now allowed her new friend Nymeria to join her little field gang. So well done, Auntie Saffy!

Next time, it is the turn of our instructor Lucy Powell to choose her horse of the week.